‘A few years ago, Jon Lord’s Concerto for Group and Orchestra – in combination with Child In Time literally changed my life,’ writes Monika Schwarz. This is her review of Jon Lord’s concert in Györ, Hungary. 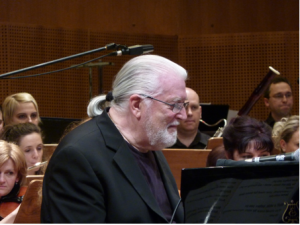 ‘So, given the chance for hearing this masterpiece live once again (and the hope for ‘Child’ too, not to forget), what else could I do but drive to Györ. The Richter Terem Hall is a building right at the center of the town with a capacity of estimated 500 – rather surprisingly small for a concert like that.

In fact we noticed that the stage was almost as big as the audience room, which gave the performance a very charming, intimate flair.

The concert started as usual with Jon’s ‘baby’, the Concerto for Group and Orchestra, introduced by Jon Lord himself, “written in 1969 when I was eight or nine”.

The first Movement, “a battle between band and orchestra which none of both wins”, and indeed a battle it was, with a very precise orchestra and a band booming in as if they intended to conquer not only the concert hall but the whole of Hungary. Not so far-fetched, as Cry Free actually are a Hungarian DP-coverband who enjoyed some kind of home advantage ;-).

The more quiet intro for the second Movement (admittedly my favourite of the Concerto) gave us some time to ‘recover’ and to wonder how Attila Scholtz, the singer for Cry Free would do, as it was his first time to perform with Jon Lord (Steve Balsamo, Jon’s ‘regular’ singer had some other obligations and couldn’t appear for this night).

To say in advance, he did a great job, and not only with the vocals in the second Movement but throughout the entire evening!! Some moments of nervousness at the beginning were soon overcome, and after that he showed a power and range of voice which were more than convincing.

Oh, and as a very personal remark: Thank you so much Jon for adding that third vocal verse to the concerto! Especially the instrumental bridge is pure joy, expressed in music, and a bout of gooseflesh and some tears in my eyes are reactions I can’t help but enjoying thoroughly.

The third Movement was again a showcase for Olivér Lee, Cry Free’s guitar player. He took that beautiful guitar solo at the beginning and made it completely his own by not sticking slavishly to any of the recorded versions, but adding a new and lovely one. Same as Tamás Tatai, by the way.

Cry Free’s drummer was always the solid, reliable backbone of the show, never intrusive or showing off, but always on the spot when needed. His solos were true demonstrations of skill and musicianship. And once again, band and orchestra ended in synchronicity.

After an interlude of about 20 minutes the show went on with ‘Pictures of Home’, one of the songs that always seem to me to be ‘written for an orchestra’ with their almost epic vehemence. Next came ‘The Sun Will Shine Again’, and with it the first highlight sung by the extremely talented Kasia Laska.

It seems a little unfair, but when you hear nothing but excellent performances from an artist, you tend to expect nothing less for the next one, the following and so on. The better when you don’t have to experience any disappointment, and with Kasia we truly never did. She combines a lovely voice with apparent passion for music, “and even my wife likes her” (quote Jon Lord). 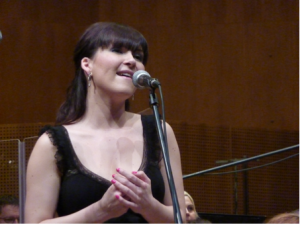 The uptempo piece ‘Bourrée’ changed mood from slightly melancholy to lively again, and you had to be there to learn what a belly-dance-club has to do with that song.

‘Pictured Within’ is probably the centerpiece of the second part of the night, and certainly a challenge for any singer. Later we heard that Attila was a little reluctant performing it, but that Jon insisted. Well, they say that the Maestro is always right, and so he was this time too. A fresh and very touching interpretation made this performance worth rubbing shoulders with those from Miller Anderson or Steve Balsamo. I think none of the two (Attila and Jon that is) were having any regrets about their decisions afterwards.

The ‘Telemann Experiment’ never fails bringing a smile to my face, and if it doesn’t do the same for Georg Philipp Telemann somewhere in Heaven, then it only can be a frown – one of the kind ‘Why on earth couldn’t it have been ME creating such a masterpiece…?’

‘Wait A While’ – again performed beautifully by Kasia Laska – made the continuation. After that it was ‘Gigue’ from the album ‘Sarabande’, again a cheerful and rather swift song with an excellent drum solo, and the one that concluded the ‘official’ part of the night.

Did anybody notice how there is always a change in moods? A slow, emotional, yes even sad song always makes way for an uplifting one. And the audience followed these changes of mood willingly and happily and paid their respect in a huge round of applause for all of the contributors: the Györ Philharmonic Orchestra conducted by Mr Márton Rácz, Cry Free and Kasia Laska, and the hugest one of all of course for Jon Lord.

Again a very short break, and then it was time for ‘Soldier of Fortune’. This was also the first time save a few bars in the second Movement that the two singers performed together – and they did shine! The sweet and lovely voice of Kasia Laska was flowing over and intertwining with the one of Attila Scholtz to paint that picture of sadness and regret in that song.

But not much time for sadness, the first notes of ‘Child In Time’ came from the Hammond, and – as always for me – with them came gooseflesh all over.

No, I haven’t said anything about Jon Lord’s performance that night so far. I mean, what can I say that hasn’t been said so many times before? About the man who created all this music? Supreme musicianship, an endless source of improvisations, ‘the’ master of the Hammond (and not to forget of the piano), who makes the ‘beast’ growl and howl but also sing in the sweetest of melodies, conférencier de luxe? All of this, and yet so much more.

What – at least to me – makes these nights so unique is the enormous generosity of Jon Lord. Not only permits he all those conductors and orchestras to modify his music to a certain extent with their interpretations, the much more important thing is that he is not afraid of sharing his soul with the musicians and the audience. Whenever he touches the keys, there is a bond between stage and audience, some magic flowing to and fro. You always feel embraced by the warmth of his personality, expressed in his gorgeous music.

I have said it before, but I think it can’t be said often enough: We are blessed with the chance of experiencing one of the great composers/musicians of our time ‘at work’, only that he doesn’t make it look like work but true and deep enjoyment. An enjoyment that is, in fact, more infectious than any virus could be.

Thank you Jon – again for a great night, once more for your gorgeous music, and for sharing your passion for it with your audience!’

One thought on “An evening with ‘the Lord’ in Györ”