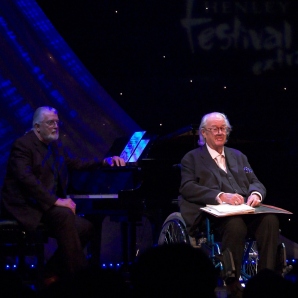 Jon Lord has donated the music of To Notice Such Things, which he wrote for Sir John Mortimer to a local stage production in Henley on Thames, England, who will perform Mortimer’s A Voyage Around My Father next week.

During their friendship, Jon Lord and Sir John Mortimer actually talked about writing their own musical show, writes Get Reading:

– We did talk about producing a posh musical or a a small opera together and John had been interested in adapting Oscar Wilde’s The Canterville Ghost. I read it but in the end it was something which was more fun to talk about over a bottle of wine on a winter’s evening than to actually do, says Jon Lord.

He explains how the pair did come to work together onstage:

– There was one time when his pianist was poorly and he said to me: ‘I don’t suppose you’d like to play?’ Of course, I was glad to. Then I was asked again and eventually he asked me if I would write some things for it.

Jon Lord has refused to let the Henley Players pay for his music.

– John would be frowning down on me if I took money from a small local society for doing this. No, I shall enjoy coming to see the show!

The Henley Players will perform A Voyage Around My Father at The Kenton Theatre, Henley October 19-23. For details, call 01491 575698 or visit www.kentontheatre.co.uk.