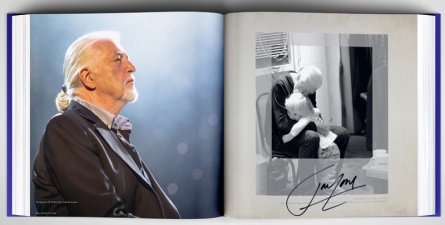 At midnight tonight (GMT time), we open our special commemorative sale of All Those Years Ago, the Jon Lord photo book.

For a five day period ending on July 16, 2015 (see update below), the third anniversary of Jon’s passing, the book will sell at £150 incl. world wide delivery.

As a special bonus, the first 25 copies will come with a postcard signed by Jon Lord. Jon had signed these while on tour, and they recently came to light among our stock. See an example to the right.

Also available will be the Jon Lord Signed Edition of All Those Years Ago. See top photo. Signed by Jon Lord, these will sell at £300, and there are five copies only.

The signatures were signed by Jon, when the California Jam Books were produced. Jon signed them 3 weeks before he died.

Both editions will be available only from JonLord.org. As always, a portion of the profits will be donated to Jon’s favorite charity The Sunflower Jam.

Orders can be placed from midnight tonight (GMT time): JonLordShop.org

More details about All Those Years Ago.