Set in Luxembourg City’s historic Square Guillaume, the evening’s first half comprised a handful of rock classics arranged for strings, horns, band and sung by Kasia Laska and Doogie White.

Jon Lord joined for the second half and a storming selection of his solo material and Deep Purple songs – only interrupted by the nearby cathedral’s chiming bells.

The Maestro charmed and rocked the crowd with enthusiasm, and Doogie White and Kasia Laska mesmerized everyone with their vocal supremacy. Perfect Strangers and Pictured Within provided a double-up highlight of the evening.

At the end, Child in Time, held the square breathless for a thunderous climax to a captivating show. 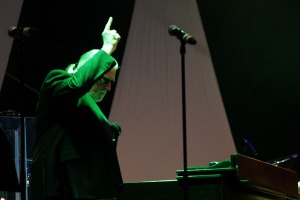 Second half with Jon Lord:

Were you there? Please add your review in the comments below.