Tonight sees the 15th anniversary of Jon Lord‘s final touring show with Deep Purple. At Ipswich‘s Regent Theatre on September 19, 2002, Deep Purple bid a classy farewell to their maestro, as he made good on his promise to himself to spend more time on his own music.

Jon would later guest with Purple on individual songs, but this was his final scheduled appearance.

In February 2002, Deep Purple’s winter UK tour came to a stop halfway through as more or less the entire band and crew caught a seemingly unbeatably bad case of the flu. This would have been Jon’s final tour, and as the remaining venues were postponed for September, it was agreed that Jon would appear at the second half of these concerts with his successor Don Airey handling the first half.

The transition moment between the two became a nightly highlight. Don Airey would finish his solo spot, the stage lights would dim briefly and come up again to reveal Jon at the Hammond majestically playing the intro to Perfect Strangers.

The show in Birmingham was filmed and released, but Ipswich became the real send-off. Your writer attended the show and penned an emotional review for The Highway Star, Deep Purple’s fan website. Here is an extract:

‘The end moves irreversibly closer as Jon mesmerises us with a spine tingling piano opening to When A Blind Man Cries. It includes familiar snatches of Pictured Within and the second movement of the Concerto, all appreciatively acknowledged by the crowd. This one-off feature is the show’s first defining moment and it brings home the importance of the night.’ 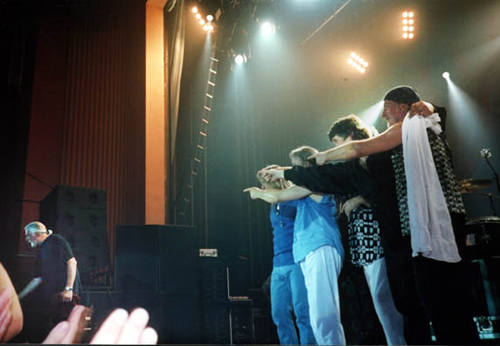 At the end of the show, Jon was afforded full attention from his band mates and the audience:

‘After a six-man full line-up bow along the front of the stage, the rest of the guys gently usher Jon Lord forwards. Standing in a line, arms linked, they all point to him as he – visibly humbled and in distress – makes his way slowly along the edge of the stage, bowing, smiling, crying, shaking as many hands as possible and waving to those further back. At the same time, applause, acclaim, admiration, respect and a thousand desperately inadequate thank yous pour over him from the theatre.’

You can read the full review on The Highway Star.