Whenever Jon Lord and Hell are mentioned in the same sentence, you know there’s good stuff coming. The Hell in question is of course the tiny village by that very name just outside Trondheim, Norway. Counting only a handful of houses, it still has its own railway station.

For many years it has also had its own music festival. Starting out as the Hell Blues Festival, organiser Knut-Morten Johansen, who happens to be a big Deep Purple fan, has since widened its scope and now it’s called the Hell Music Festival. The variety of artists is best illustrated by this year’s festival poster which featured Jon Lord alongside Snoop Dogg.

Like four years ago, Jon Lord was again performing at Trondheim’s Nidaros cathedral on July 1, 2007, but this time the concert features his ‘From Darkness to Light – a Prayer for the Millennium’ in its first professional performance.

Read on for a tour report from Jon Lord’s weekend in Trondheim, Norway.

Saturday June 30, 2007 – hotel, Trondheim – afternoon
Jon Lord is excited and in a chatty mood. After a brief photo session with singer Jørn Lande in the hotel stairs (in front of a Hammond cupboard – an huge old piece of furniture made from dark wood) he says he’s going back to the Hammond organ again.

– You know, after a few years out of Deep Purple, I have recently rediscovered my love for playing the Hammond organ. My wife said to me, ‘You’re an organ player.’ I said, ‘I’m a pianist’, because that’s what Ian Gillan used to call me. Like Ritchie was the banjo player, he jokes.

Jon Lord plans to write some new music for the organ rather than the piano he’s focused on for a few years now. However, he has also found a new love for slow, introspective music, so it seems his musical vocabulary is once again rebalancing itself.

It’s an impressive building, dark, devout and gloomy with heavy stone pillars – till you notice its hundreds of coloured glass mosaic windows near the ceiling and in the end wall. Nathalie Lorichs and Nina Brovoll are singing backing vocals for Jørn Lande and they feel the atmosphere of the 1000 years old venue.

Nathalie is the daughter of Christer Lorichs, a longtime Deep Purple fan and friend of Knut-Morten Johansen. The beaming father is moving around the church with his Nikon, searching for the best shot of his daughter on-stage with Jon Lord as she discusses musical details with Jørn Lande.

The Trondheim Soloists run through ‘Music for Miriam’. It features a dazzling solo violin oozing of confidence and class. Some say class is actually spelled jonlord A little later the PA buzzes slightly and Jørn Lande lets his golden toned voice boom through the stone walled room.

‘Pictured Within’ is extraordinarily beautiful with Lande’s voice effortlessly filling the room. Afterwards I congratulate Jon on a new and moving version of a song that always welled an emotional tear into my eyes. We agree Lande’s got a great voice and Jon says he might use him some more. Good idea.

As the orchestra and Jon Lord rehearse more pieces, tourists clad in denim and summer dresses – just popping in to check out the church – stop in their tracks and listen. They stare in awe at the unbelievable scene of a full orchestra rehearsing in the cathedral, creating wonderful atmospheric music there. Some even catch themselves applauding as a piece ends. 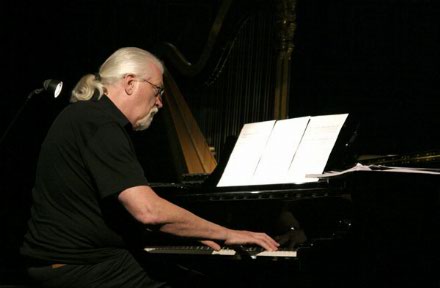 ‘One from the Meadow’ seems a bit sketchy, but is till a wonder to hear.

And then comes the concert’s main attraction, ‘From Darkness to Light’, a 25-minute piece for piano, strings and choir. It moves gently from silence to roar. One minute a foaming sea in slow motion, the next a hot summer afternoon in the country with the wind making waves in the crops. They run through this twice.

Saturday June 30, 2007 – Nidaros cathedral – evening
Festival organiser Knut is asking Jon to join in that evening’s Hell Blues Band jam at the festival stage with Jeff Healey, Glenn Hughes and Jørn Lande.
– I’ve got some songs for you; ‘A Whiter Shade Of Pale’, ‘When A Blind Man Cries’, and ‘Knights in White Satin’, he teases. Jon Lord wants to know who else is playing:

– I’m not playing with Snoop Dogg!

But even if the rapper’s not part of the plan, Jon has to decline.

– I know I’ll have too good a time and it’ll be five before I get back, he says regretfully.

He’s got a lot of work to do the following morning. His ‘Durham Concerto’ for Durham University must be complete by the following Wednesday and he’s way behind. As it turns out, the jam session never even happened as Jeff Healey Band ‘took their time’ with a great set.

Outside the cathedral Jon is surrounded by a group of very young female fans looking for autograph. 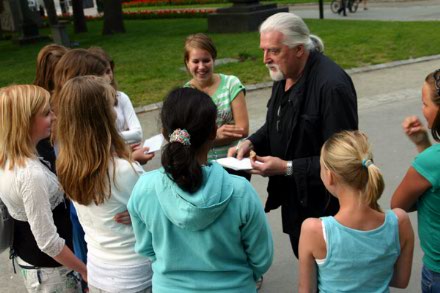 He also meets local artist Anya Magnussen, who felt such an influence from Jon Lord’s music, that she created a number of paintings based on the music and words for ‘From Darkness to Light’. A book on her work will be given to all members of the audience at the Nidaros show.

Sunday July 1, 2007 – on the road to Trondheim – afternoon
In the car on the way to the final rehearsal Nathalie Lorichs is practising. She’s got Jon Lord’s ‘Beyond the Notes’ album playing on the car stereo. The atmospheric ‘One From the Meadow’ fits perfectly as she sings along to our scenic drive alongside a Norwegian fjord with mountains in the background – ‘stretching before my eyes, a vista just like a Heaven here on earth.’

The minister of cultural affairs has taken his seat alongside the Trondheimers out for an evening of Jon Lord music. Knut-Morten Johansen introduces the show and the concert starts out ever so gently with ‘I’ll Send you a Postcard’ in memory of Tony Ashton.

The cathedral is colourfully lit and the silence is deafening after each piece of music. Both audience and musicians hold their breath waiting for the final notes to fade away before the applause crash in over the stage in a wave of appreciation.

Jørn Lande nails ‘One From the Meadow’ beautifully, adding his bluesy touch to it, and it really would be a delight if Jon would use him some more. His voice reminds me of a young David Coverdale going for the lower notes – but luckily without the ‘Tom Jones Hollywood attitude’. Glorious.

For ‘Pictured Within’ he sings with beautiful restraint, as if afraid to disrupt the emotions within the music. Or perhaps he’s just conscious of not blowing us all away if he really let that voice out at full throttle. It’s still an emotional piece of music that never fails to give me a teary eye. It’s not that he betters Miller Anderson’s versions, he just sings it differently and has a great voice for it.

Jon Lord speaks between all the music. He explains how ‘Miles Away’ was written after he came home from an American tour ‘with a certain rock band’…

‘Music for Miriam’ – Jon Lord’s late mum – is another emotional highlight. Jon introduces the piece by explaining how the solo violin and solo cello actually represent his parents. The larger voice played by the violin is his mother. And the smaller voice played by the cello is his father going ‘Yes dear, yes dear.’

Violinist Sveinung Lillebjerka has played the piece so many times, he must know Jon’s mum very well by now, says Jon. Øyvind Gimse (right) is introduced as the best solo cellist Jon has ever heard.

In fact there’s a mutual admiration between Jon Lord and the Trondheim Soloists whom he’s played with many times now. So much so that tenor-violinist Johannes Rusten has composed a piece especially for Jon Lord. ‘In beautiful moments’ is inspired by the good times the orchestra have had with Jon Lord and it is performed as a surprise at the Nidaros tonight. Afterwards Jon is impressed and comments that we must look out for Johannes Rusten as a composer.

The evening’s final piece is ‘From Darkness to Light’. A restrained tour-de-force for piano, strings and choir. It’s a massive setup for a demanding piece of music. Jon explains how it started in 1998 after an idea to compose something for the coming millennium. The words came from Jon’s local vicar Paul Nicolson – ‘my Da Ponte’ – Jon says, likening Nicolson to Mozart’s lyricist (all other comparisons aside).

‘From Darkness to Light’ starts as a glimmer, a small spot of light, before it slowly grows, sprinkling more dots till it expands and flows onwards for close to half an hour. Suddenly Norwegian tenor Thor Inge Falch soars in with an amazingly powerful vocal overpowering both the dynamics of the orchestra and the blazing choir.

Brilliantly crafted and drawn out, ‘From Darkness to Light’ is nevertheless a demanding piece of music. Not as immediately ‘catchy’ as ‘Sarabande’, yet not as intricate as ‘Boom of the Tingling Strings’, which the Odense Symphonic Orchestra recorded last December.

The concert closes with a rousing standing ovation.

Jon Lord invites Paul Nicolson to the stage. Nicolson briefly expresses how he is most impressed with the way his words (see page from Anya Magnussen’s book right) have been put to music and the whole evening at Nidaros.

And that’s it. It’s all over and there’s smiles all around. All the nervous energy built up before the concert has been exchanged for a solid and genuinely thrilling musical experience by the hands of Jon Lord – here with festival organiser Knut-Morten Johansen and his wife Amina.

Monday July 2, 2007 – Dokkhuset, Trondheim harbour – really early hours
A bright northern light makes for a perfect setting for late night Norwegian tapas with red wine. The orchestra, the singers, Jon Lord and a string of guests and friends enjoy the unusually well lit night – like a summer evening at dusk that never ends.

Nathalie Lorichs is still high from her concert experience and is keen to know more about Jon Lord’s way of composing. How much of it does he hear inside his head as he sits down to write a new piece of music?

– About 80 percent of it I can hear. The rest follows naturally. That’s why I like to compose on paper rather than on the computer. The pen takes on a life of its own and just continues writing the music, he explains.

Just like some of the great 18th century composer Jon Lord tries not to follow a format when he writes. Back then they tried to abandon whatever format was predominant at the time, be it sections of fours or eights, and that’s how a song like ‘Pictured Within’ came to its present form.

– I follow the thought instead of trying to make the idea fit into a format. This is something I did when started writing seriously for myself before the ‘Pictured Within’ album, Jon Lord says.

words and pics by Rasmus Heide

One thought on “The second (Norwegian) coming of the Lord”