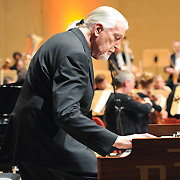 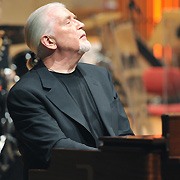 Jon Lord can still pronounce the name of the little town not far from Essen: Oer-Erkenschwick. In 1975, he recorded his Sarabande album with Philharmonia Hungarica conducted by Eberhard Schoener. He explains to the audience at Essen’s Philharmonie that “tonight is only the third time ever that the whole work is being performed live.“

On Monday evening it was performed with the Philharmonic Orchestra Hagen conducted by Florian Ludwig and Dead Composers Rocking Society, who are bridging the gap to the classical orchestra as rock band.

For Jon Lord, former keyboarder with rock-icons Deep Purple, bringing together rock music and classical has been part of his compositional work for many years. Already in 1969, his Concerto For Group and Orchestra performed by Deep Purple and the Royal Philharmonic Orchestra stunned the musical world. Sarabande has no vocals, but plenty of Hammond B3-organ, with which Jon produces the odd brief snarl.

In the shape of a baroque suite, Sarabande succeeds well with combining the Hagen Orchestra’s massive body of sound with the band’s rocking sections. Atmospheric and carried by strong melodies, the classical and the rock are brought together in a conclusive way.

Deep Purple fans get their money’s worth during the second half of the Essen performance. Jon Lord asks Rainbow’s singer to the stage, and Doogie White proves himself a convincing rock singer who intonates Purple tracks like Lazy, Soldier Of Fortune and Pictures Of Home powerfully. At the end the not-so-easy Child In Time makes him stretch his voice to the max. 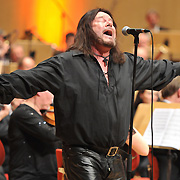 The quieter almost mucial-like vocal pieces with female singer Tanja Schun have their own colours. After almost three hours of music, Jon Lord receives a seemingly endless thunderous applause from the audience.

Translated from German by Monika Schwarz.