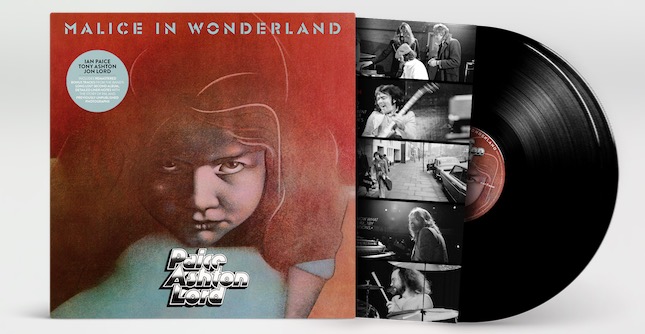 “Here’s my glass, please fill it, I’m not gonna spill it.” The wistfulness in Tony Ashton‘s raspy voice is palpable as he recounts for us his intentions. “I’m gonna stop drinking… Some day…” Between verses Jon Lord takes a brief but altogether fulfilling Hammond solo, and it all feels warm and fuzzy like an old coat.
Review by Rasmus Heide
earMUSIC has reissued Paice Ashton Lord’s only studio album Malice in Wonderland on both CD, double vinyl and streaming. Hard copies include an additional disc of songs rescued from the band’s aborted second album. More on those later. The package is lovingly embellished by Alan Messer’s unseen photos of the band in rehearsal and onstage and extensive liner notes by DPAS custodian Simon Robinson – all carefully presented in both digipack CD and gatefold vinyl.

After the demise of Deep Purple in 1976, Jon and Ian Paice teamed up with singer and piano player Tony Ashton for a new and rather ambitious project. Built around the two keyboard players and Paicey’s always eager and swaggering drums, the trio would create a concept of new music that didn’t rely on past Purple laurels but rather continued Ashton and Lord’s previous activities on the First of the Big Bands album from 1971.

In fact, a little known studio session in September 1973 showed promise of the style that would become that of Paice Ashton Lord four years later. Then, having just hired Glenn Hughes for Deep Purple, Lord and Paice went into the studio to lay down a couple of tracks that resembled greatly the style they would refine on the Malice in Wonderland album.
And here it is. Long out of print on both vinyl and CD, the Malice in Wonderland album holds arguably some of both Lord’s and Paicey’s most fascinating work. Both being at the top of their game, having just laid Deep Purple mark 4 to rest, their performances are energetic and the music is brimming with ideas. Intent on forging a new direction, the music’s key ingredients are the double keyboards over Ian Paice’s authoritative drums with Ashton’s voice in front – occasionally supported by girl singers. And plenty of brass. And Paul Martinez‘s bass. And Bernie Marsden‘s guitar. Altogether a very full and rich sound.
Utilizing the tonal richness of both Lord’s Hammond and Ashton’s piano and assorted synthesizers, the Malice in Wonderland album is a lush listening experience, and this new reissue makes the music come to life with its abundance of carefully executed minute details everywhere.

The songs
Opener Ghost Story sets an eerie mood to Ashton’s story of being spooked. Remember the Good Times is a solid shuffle of rather majestic proportions. Arabella is Ashton’s sorry account of the hotel the band stayed at in Munich while recording the album. The girl singers set the tone and Bernie Marsden’s slick rhythm guitar pushes the song along.

Silas & Jerome is a particular favourite most recently revived for the Celebrating Jon Lord concert at Royal Albert Hall in 2014. The song sets the story of an unfortunate touring libido to a distinct and imaginative beat.

Dance with Me Baby literally flies in from the right with Ashton’s signature honky tonk piano opening the tune before drums and bass enter and the song hits its stride. On the Road Again, Again is an uptempo bluesy tribute to the life of the travelling rock star – rhyming Holiday Inn with shave your chin.

This gives way to one of Ashton’s finest performances of the somewhat autobiographical I’m Gonna Stop Drinking Again complete with promises, challenges and regret, a very fine Hammond solo from Jon and supportive girl backing singers. A classic.

Approaching the end, the band kept the title track to last. Malice im Wonderland is a tour-de-force overflowing with tasty organ, flinching rhythm guitar, those guv’nor drums and Ashton’s bar room piano. Quite the journey, the song mellows slightly for the bridge before upping the ante for the grand conclusion.

More than anything, the music on Malice in Wonderland is pushed along relentlessly by Ian Paice’s drums and Martinez’s bass, while the rest of the band provide all manner of colours on top, in particular Lord and Ashton who shine throughout. Within the careers of everyone involved, here was an album quite unlike anything they’d done before.

The aborted follow-up
After an unfortunate launch seeing a string of European dates cancelled, PAL settled on a handful of British dates before starting work on their second album. Tony Ashton never quite warmed to the idea of fronting such a large operation and eventually the second album recordings were shelved.

While the mastertapes went AWOL, Tony Ashton kept a rough mix on a cassette which he initially took home to work on the lyrics. From this tape eight songs were rescued for a previous reissue of the album, and for this new release these tracks have all been remastered to bring out more shine and dynamics.
Enjoy then a studio version of Steamroller Blues so ferocious it could have been a live take complete with Bernie Marden’s intense guitar solo. The band played it at their shows, so it’s recognizable from their BBC Sight & Sound CD.
Nasty Clavinet is an instrumental with a fascinating mid tempo groove and lots of well, nasty clavinet. Obviously a backing track waiting for vocals, it swaggers along nicely till Marsden takes a blues tinged solo halfway through and a saxophone solo takes us to the fade out.
Black and White is a slow blues with heartbreak lyrics by Ashton about the piano man who didn’t know the difference between black and white.
Moonburn is a feisty instrumental with interesting breaks. Again, apart from the vocals it has an almost finished feel complete with brass attacks and even breathy girl backing vocals oozing the title. One can only ponder what nocturnal themes Ashton had in mind for this.
Dance Coming is a rather quirky almost jazzy piece in places with curious spoken words inspired by the BBC TV show Come Dancing. In the middle of it all, Jon’s Hammond commandeers attention.
Goodbye Hello LA is a typical PAL tune with road experience lyrics from Ashton, grand brass sections, a rough guitar solo and – as is nearly the case everywhere – outstanding Hammond and piano work.
Untitled Two opens with a guitar and bass riff before breaking into uptempo funk with more great brass, breaks and solos. Once again the remarkable interplay between Paicey and Martinez stands out and one wonders how come the two never played together again. About two minutes in, Lord swoops in with an exciting Hammond solo full of signature licks before the song eventually grounds to a halt over some faint studio chatter.

The bonus tracks and thus the reissued album as a whole finishes off in style. Ballad of Mr. Giver is a re-recording of a song first found on the First of the Big Bands album. The vivacious shuffle rolls along with ferocious conviction beating the original on pure energy. Ashton delivers the words in his ‘spoken singing’ style before first a swinging trombone then an inspired piano solo take over. Break and Ashton picks up the verse sounding positively sweaty.

If the band had continued to live, had allowed themselves to grow and been able to build more self esteem into their singer, they could have become a formidable act. As a whole, the aborted second album shows a band attempting to take their baby to new levels through excellent musicianship as a tightly knit unit. They deserved the second chance they never got, and with both Lord and Ashton gone, we’re left with this precious document of their endeavours.