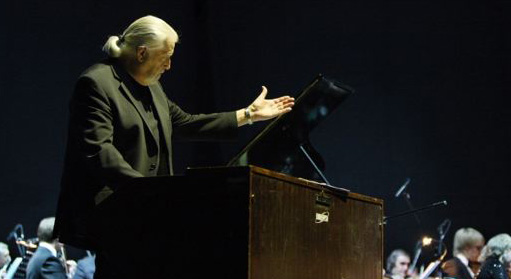 In this part of JonLord.org’s new year interview, Jon Lord looks into the future and talks about upcoming projects and plans.

In March his new album, To Notice Such Things, is coming out on Avie Records. Will he take this new music to the stage?

– Yes. We’re going to play it. I’m hoping it’ll be in the summer season up in Liverpool with the Royal Liverpool Philharmonic Orchestra – the same orchestra that I recorded with for Durham Concerto.

– I can’t play Boom of the Tingling Strings myself – that is for those young lions called concert pianists – but I can play To Notice Such Things. It’s not a piano piece; it has a piano as part of the orchestra, but the solo flute is by far the most important instrument. And it’s quite a display for the flute as well; it’s not easy.

– So yeah, I’d like to think that I could play it at maybe a few music festivals here and there next summer and I might slip it into a concert if we can somewhere. Not sure it would fit into my Concerto-type shows. It’s not the right kind of piece for that. But I’m definitely going to be playing it.

Resurrecting Sarabande and Gemini Suite
– I’m trying to redo the Concerto shows. I’d like to be able to do a different first half, not just use the Concerto, and then a couple of different things in the second half so I can perhaps go back to some of the places I’ve already been. I’d like to use a couple of pieces from

Gemini Suite and I’m working on that as we speak along with a couple of other things, which I won’t name yet.

– I want to provide an alternative to offer promoters a choice; they can have the Concerto show or another sort of show. It’s about the whole thing that has defined my musical life – orchestras, rock bands, singers.

– These last couple of years I’ve had the most enormous

fun and enjoyment, and I’d like to be able to extend it. I also want to do Sarabande as a complete suite. I have spoken to one or two of the people involved about doing it with the original cast.

– I’ve never played Aria or Caprice live and there is also a missing piece – not completed in time for the recording – which I would add. So I would do Sarabande in the same order as on the record and include the missing piece.

– Also, to follow the new album, I’d love to do an album of songs with my two vocalists –

Kasia and Steve. Its working title is Songbook, but I’m sure it’ll end up being called something else. That’s all on the drawing board, so all I need is a few extra hours in a day and we’ll be there. I don’t know who to ask though…..

New publishing deal
– I’ve noticed in the comments on the website that one or two people have asked where they can get various of my pieces as music scores. Well, we’re working on a new publishing contract with EMI Music which will hopefully enable us to make stuff available, so that when string quartets or string orchestras or anybody in fact want to play my music, they can get hold of it.

– And as I move forward, hopefully I’ll be able to publish all the arrangements for the orchestra and so on, the Concerto, Sarabande, Gemini Suite, etc., etc.

– So that’s being worked on very strongly as something to be hopefully finished by the middle of 2010. Of course as soon as we know, it’ll be on the website, how to get them and so on.

The touring wish list
– Other questions that have been asked are “When are you coming to play in so and so?” I think my manager gave a very good answer to that in an interview. He said “We have to be asked.”

– It’s not as if you can just sort of turn up and say “Hey, we’re going to play in your town tonight.”  There’s an infrastructure – there’s a local promoter, there’s a more national promoter. There’s a whole chain of command that has to be addressed, and that’s what we’re doing.

– I so much love playing. The orchestra project will continue along, and what I’ve now come to call the Lichfield project, which is a smaller group of players; myself plus a second keyboard player, bass, drums, my two singers and a string quartet. We’re looking to do some things with this line-up next summer at a few of the classical and crossover-type festivals around Europe.

– So generally speaking, I’m keeping busy but I just need to make sure I still slot in plenty of hours in front of a burning hot piece of manuscript paper. That’s pretty much where I’m at at the moment. That’s my state of the nation thing.

5 thoughts on “Interview: Jon Lord’s state of the nation”