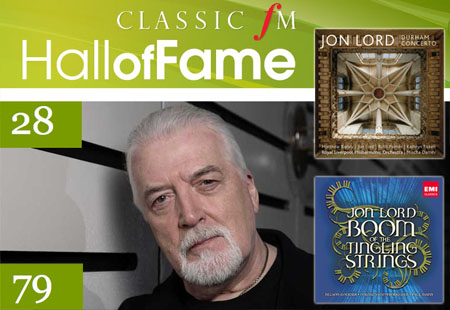 Jon Lord’s Durham Concerto has reached no. 28 in this year’s Classic FM Hall of Fame, it was revealed Monday afternoon.

Durham Concerto is Jon Lord’s highest placed entry this year, with Boom of the Tingling Strings reaching no. 79.

Both pieces first entered the Classic FM Hall of Fame last year; Durham Concerto reached no. 75 and Boom of the Tingling Strings no. 198. This makes Boom… the highest climber of the year.

– What a great year it’s turning out to be for Jon Lord. The man formerly with Deep Purple comes up with a modern classical masterpiece … the Durham Concerto up 47 places to number 28 in the Classic FM Hall of Fame. His latest work is called To Notice Such Things – a contender for the chart next year, perhaps? We’ll have to wait and see and you will be the judge as always. Great news for Jon Lord though who is one of life’s gentlemen.’

In Classic FM’s Hall of Fame Jon Lord is rubbing shoulders with all the great classical composers; Bach, Beethoven, Sibelius, Dvorák, Rachmaninov and Grieg – to whom Jon Lord pays homage with his For Example, released on his brand new album, To Notice Such Things.

Durham Concerto was commissioned by Durham University to celebrate its 175th anniversary in 2007 and was recorded with the Royal Liverpool Philharmonic Orchestra conducted by Mischa Damev with Matthew Barley on cello, Jon Lord on Hammond organ, Ruth Palmer on violin and Kathryn Tickell on Northumbrian pipes.

3 thoughts on “Durham Concerto no. 28 in Classic FM Hall of Fame”