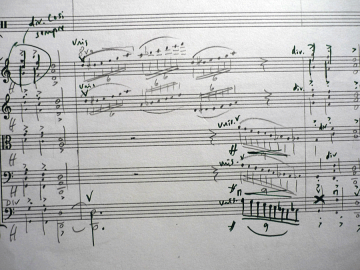 These exclusive images show Jon’s Concerto for Group and Orchestra coming back to life in 1999 after nearly 30 years of involuntary ‘extinction’.

Working from Marco de Goeij‘s by-ear-reconstructed score, Jon and conductor Paul Mann spent the spring and summer of 1999 meticulously adjusting all the score pages in preparation for the two now legendary 30th anniversary performances at London’s Royal Albert Hall in September that year.

– Over a period of several months, we met at Jon’s home near Henley on Thames, sometimes for days at a time. Supplied with copious quantities of manuscript paper, and the old audio and video recordings for guidance, we embarked on a note-by-note, bar-by-bar re-examination of the thirty-year-old composition.

– Jon also took the opportunity along the way to revise and re-orchestrate. A few small cuts were made to tighten the structure. By the time we’d already passed a couple of deadlines and the time finally came to commit ourselves, we had virtually carpeted and papered Jon’s home with sheets of scribbled-on, screwed-up and stuck-together pages of full score.*

3 thoughts on “The hand written Concerto”