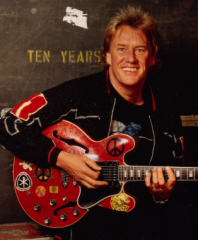 Alvin Lee (of Ten Years After) sadly passed away this morning (March 6) after unforseen complications following a routine surgical procedure.

A message on alvinlee.com says:

“We have lost a wonderful much loved father and companion, the world has lost a truly great and gifted musician. – Jasmin, Evi and Suzanne”

Jon and Alvin Lee were friends from way back, and Jon guested on a few of Alvin Lee’s records.

Two of these session were for Lee’s Detroit Diesel and Zoom albums in 1987 and 1992 respectively where Jon plays Hammond on a couple of songs.

Alvin Lee explained at the time how he got Jon, George Harrison and Clarence Clemons to help out on Zoom:

– Well, Jon Lord I’ve known since the 1960’s, he’s played on some of my albums and I’ve played on his. I’ve known George since 1973 when Mylon LeFevre and I were working on the On the Road to Freedom recording which for me was a positive step away from rock and roll. Ever since that time he likes to come over with a guitar in hand and a bottleneck, he plays a very good slide guitar by the way. George, Jon and I all live very close to each other in the part of England called the Thames Valley. 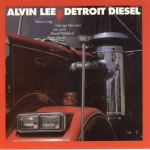 Jamming with Harrison
In a 2009 interview, George Harrison’s widow Olivia revealed the existence of informal recordings of Harrison and friends jamming around his house. She was asked whether she listens to Harrison’s music a lot.

– I listen to a lot of really rough recordings, cassettes and demos. George seemed to have a tape recording going… The other night I listened to New Year’s Eve, it must have been ’87. There was Joe Brown, a great musician; and Dave Edmunds; Alvin Lee, who was a neighbour; Jon Lord from Deep Purple.

– We’re all just hanging out. And then we’re sitting around the piano, someone has a guitar. You can hear all the wives talking, the guys are playing and we’re all singing along… I’m like, ‘Wow, who had this tape going,’ you know? And George would always end up putting it in his pocket, throwing it in a drawer, so I listen to things like that.

Any thought of releasing them?

– No, not really, but you just sit and listen and it’s sort of like you’re there again.

Thanks to Spinner.com and AlvinLee.de

16 thoughts on “Alvin Lee passes away, friend of Jon”