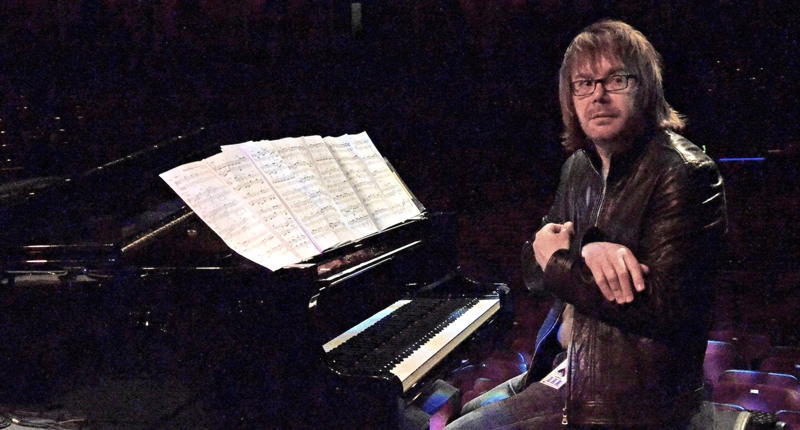 Keyboard player Nigel Hopkins played piano at Celebrating Jon Lord last month in London – including centerpiece Pictured Within and All Those Years Ago.

He kindly sent us his thoughts on the evening – with a musical memory of Jon added at the end:

‘I hope you enjoyed the concert. It’s taken me a while to get my head around it. It still hasn’t hit me properly about how important it was. I am waiting for the moment that it actually sinks in.

The camaraderie backstage and on the rehearsals was amazing. It was like everyone had been family members and they were celebrating a birthday.

In this case, it was Jon’s life and music we were celebrating and I could honestly say that there were moments when every single band member, musician and singer felt the power of respect and love for Jon and his music from the audience. Humbling and very emotional.

Some of my favourite moments were those where I felt Jon’s (I can’t say Spirit), but his emotions through playing songs like Pictured Within and All Those Years Ago. Such a new piece to many but so fitting.

They were difficult to play not in a musical sense, but as Paul Mann described it to me about the instrumental section in Pictured Within… Almost in another worldly place… I got what he meant because it was like I wasn’t playing the piano. It was as if I was a spectator.

Jon’s music as you know is something that we all can’t ignore. Hopefully in the future, we can celebrate his music again in such a prestigious way.

I’ve had many lovely messages about the concert and a lot of good musician friends who’ve requested a blow by blow account of my time with everyone, but I’ve yet to recount everything.

When I do, maybe then I’ll be in a position to talk openly about it, but I declined an interview to camera backstage as I felt that there were more qualified musicians there to utilise the time and also, there wasn’t really much I could say that everyone else couldn’t.

The only thing I could have said was when I worked with Jon [at Lichfield in 2009, Ed], he played the Child in Time intro and Steve Balsamo looked across as I started to fill up. I had played it a hundred times exactly like the In Rock studio version.

I spoke to Jon after the concert and said I filled up with tears upon hearing the opening 3 lower manual 5ths on the Hammond. He smiled. Then I told him I continued to fill up and he asked why.

I said, “Because you played it wrong”.

He laughed and said, “My dear boy, music is of the moment and had they kept the take before or the one after, it would have been different again. Music is an extension of emotions and the spirit at that moment in time”.

What he was actually saying was that we should never be governed by rules and that is one thing Paul Mann said to me about Jon’s piano parts. “Don’t stick religiously to the charts. Jon always allowed a little bit of room for improvising”.

All the best and thanks for your hard work on this site.
Nige’