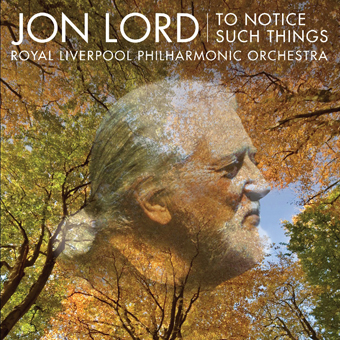 Read the story behind Jon Lord’s upcoming new album, To Notice Such Things, out on March 29, 2010.

The album is dedicated to the memory of his late friend Sir John Mortimer and contains a six piece suite for solo flute, piano and string orchestra as well as three other compositions for the same forces.

This is part 1 of a brand new interview for JonLord.org where Jon Lord discusses the music on the new album, takes stock of a busy 2009 and looks at plans for the future.

We catch Jon Lord as he is checking the final mixes of the new album.

– I’ve now received the final mixes and edits which I’m just listening to at the moment to see if there’s anything else I can complain about, he laughs.

Getting serious he explains the origins of To Notice Such Things.

– The inspiration for the suite is my friend John Mortimer, who died earlier this year.

– He was a great friend and a great inspiration to me and I hope my love and respect for him comes out in the music, says Jon.

– A few weeks after he passed away, I was offered a commission to write a piece for solo flute and strings – a flute concerto in essence. At first I turned it down because I thought there wasn’t enough time, but after a couple of days of thought, I realized that I had these three little pieces for flute and piano that I had written for the theater shows that I used to do with Sir John, and I thought that they might provide the basis for this ‘flute concerto’ and that I could write in his memory.

– John and I became friends about 12 years ago. A couple of years later he asked if I would be interested in playing the piano and writing a bit of music for him, for his theater shows – “Mortimer’s Miscellany” – during which he sat on the stage and, accompanied by two actresses, a pianist and a flute player, he read poetry and prose, told stories and jokes and related hilarious legal anecdotes, giving his wonderfully wise and witty take on life, love and the law.

Cathedral memorial
To Notice Such Things was premiered in its entirety at 2009’s Shipley Festival on July 5 (our reporter said it was ‘a real treat’). On November 17, Jon Lord performed three of the pieces at Sir John Mortimer’s memorial service in Southwark Cathedral, London. The service also included an address from Lord Kinnock,  and readings from Sir John Mortimer’s own works.

– It was kind of a happy sad occasion. The Cathedral was absolutely packed. There were hundreds of people there, and the list of the guests that they published in The Times the next day was amazing… Lords, Ladies, and Gentlemen as well as us common folk! Lots of famous actors and actresses; politicians, lawyers most of whom had been friends of John and so on. It was quite an occasion.

– The reaction I got afterwards from everybody was really delightfully positive. Everybody was asking me ‘Where can we get it?’ So I said ‘Well, keep your eye on JonLord.org and you’ll find out.’

– What pleased me most was that the music that I’d written for John seemed to touch everybody and it seemed to carry his character across to them as well. I was very pleased with that, very pleased indeed. But now we’ll see what the rest of the world think of it.

– I’m very pleased for this album to be the next thing that’s coming out. It’s called To Notice Such Things because that’s the last line of the poem Afterwards; ‘He was a man who used to notice such things.’

Come back to JonLord.org to read the next parts of this interview – about Jon Lord’s busy schedule in 2009  and future plans.

8 thoughts on “Interview: To Notice Such Music”