In this excellent interview, Ian Paice speaks with fascinating insight about Jon’s special contributions to Deep Purple‘s song writing, how the celebratory concert was structured, sharing the time keeping role with conductor Paul Mann and much more. 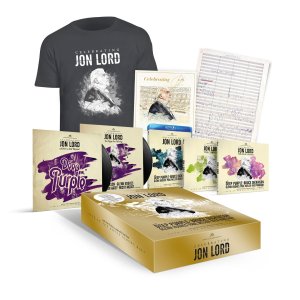 – We decided to split the show into the two factions of Jon’s playing and composing. To give the night a natural crescendo, we decided to give the audience the more orchestral pieces he played and the ones he was really proud of for the first half of the show. The second half of the evening we decided to take as many pieces of music from his many collaborations that he had been involved with from his very, very first success. […] The short list we came up with we knew were songs that Jon thought were important. Some of the songs that we thought were important, from a keyboard standpoint, and from Jon’s sort of stamp being on it, made the list.

On the absence of Whitesnake songs:
– We let the artist decide what they would be happy playing. The only thing that wasn’t done on that night was any Whitesnake tunes. That was only because when we made the short list up, apart from nudging a couple of artists in the direction we thought they might like to go, we left the choice of songs to the people who were kindly donating their time. Nobody chose a Whitesnake song.

On conductor Paul Mann and Ian Paice’s different roles in keeping the music together:

– The conductor of an orchestra is normally the boss. Paul was in a weird position, because when we do these type of things he is not the boss; I’m the boss. That is the point. Basically, I am conducting the conductor, who is conducting the orchestra. It is the only way it can work, because in popular music we play on the downbeat and it is a much defined time signature. The downbeat is definite and that is it. Orchestras work on the upbeat, which is a little less definite. The orchestra is always a fraction behind. What Paul was doing was pre-conducting the orchestra. Once he got them there, then he could relax and almost let me take over. It is a very complex thing to get right. To our benefit, this time, the orchestra was full of young people. They play classical for their business, but they listen to jazz, rock and roll, and rap. They know what the feel should be. You’ve just got to get them started in the right place and it all comes together.

– What Jon would quite often do, back in the early days, when Ritchie Blackmore and Roger Glover would be jamming riffs, would be to say, “I think if we changed the inversion of that chord then I think it would work much better.” He would then demonstrate what he meant and, nine times out of ten, he was right. […] You could see his brain kick into gear and he would go into his database of knowledge and come up with something to try and that was sometimes very important to us.

– We could see Jon start to fall out of love with being on the road; not the band. He loved being on stage that two hours every night; it was the other 22 hours that were starting to drive him crazy. The things he wanted to do, he couldn’t do while he was traveling and changing hotels every night. He needed to be in one place where he could get this music out of him. He said, “It probably makes no financial sense, but I’ve got to write this music and the only place I can do this is to be at home. If the idea comes, then I can get straight in the room and write it down. This is a decision that comes from my heart and not my head.” His head should have told him to stay where he was and to continue with a good income, but he made a purely artistic, honest and brave decision that he felt he had to do.